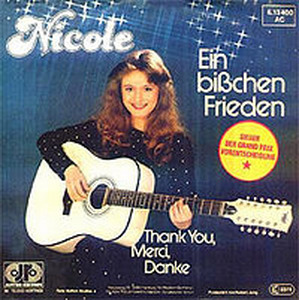 Written by German Eurovision-songwriting duo Ralph Siegel and Bernard Meinunger and performed by Nicole, the song 'Ein bisschen Frieden' ('A little bit of peace') won the 1982 Eurovision Song Contest. The lyrics of the song advocated world peace and hope, with Nicole performing the song in German, English, French and Dutch worldwide. The song was later released in Danish, Italian and Russian, with special German-English-Dutch and German-English-Italian combinations being released also. The song gained chart success in many countries and achieved the Eurovision's largest winning margin for the time, reaching a record margin of 61 points. The global success of the song performed at the Eurovision Song Contest, a platform for cultural exchange, highlighted a cross-cultural wish for peace. The performance (and the later release) of the song in various languages made the song's lyrics accessible to people from various countries, promoting unity between cultures.