'We Are The World' 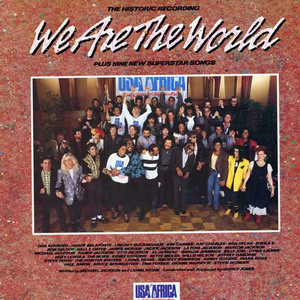 The charity single 'We are the World' was recorded by the group 'USA for Africa' to support famine relief efforts in Ethiopia. The idea behind the production of this single came from activist Harry Belafonte and fundraiser Ken Kragen. Michael Jackson and Lionel Richie wrote the lyrics and music and the song was released on 7 March 1985. The song brought together some of the most famous artists in the music industry at the time and was a worldwide success. It topped the music charts throughout the whole world and became the fastest-selling American Pop single in history.The song 'We are the World' reminds us of the fact that we are all human beings living together on this planet and that we should help each other in any way possible. The powerful image of many American musicians joining hands and singing together raised awareness of the famine suffered by the people of Ethiopia.