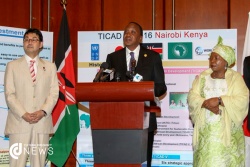 The Tokyo International Conference on African Development (TICAD) will be hosted in Nairobi, Kenya on August 27th and 28th 2016 for the first time ever in the African continent. The conference is organized by the Republic of Kenya and the Democratic People's Republic of Japan in co-operation with the United Nations, United Nations Development Programme (UNDP), the World Bank and the African Union Commission (AUC).

The last TICAD took place in Yokohama, Japan, and was one of the largest summit meetings ever held in Japan, with over 4,500 participants, including Prime Minister Shinzo Abe and the Minister for Foreign Affairs Fumio Kishida. This conference will see delegates from 51 African countries, 31 development partner countries and Asian nations, a large number of NGOs and participants from the private sector and civil society come together for the 6th TICAD, held at Kenyatta International Convention Center in Nairobi, Kenya on August 27th and 28th.

The TICAD is led by Japan, and co-organised by the United Nations, United Nations Development Programme (UNDP), the World Bank and the African Union Commission (AUC).

The TICAD process has attracted attention from African states and TICAD partners, such international organizations like the United Nations System and regional organizations like the African Regional Economic Communities (RECs), the New Economic Partnership for Africa’s Development Planning and Coordinating Agency (NEPAD Agency), as well as civil society and private sector actors. In the 20 years since its conception, the TICAD has evolved into a major global multilateral forum, providing an opportunity for high-level policy dialogue amongst African leaders and their development partners. Through such a dialogue international stakeholders can collaborate to promote Africa’s development and mobilize support for African-owned development initiatives.

TICAD VI is the first TICAD to be held in the African continent and for this reason marks a milestone in the history of the conference. All previous conferences were held every five years in Japan. The decision to host TICAD VI Summit in Africa was reached in response to a request from African representatives during the TICAD V Summit in 2013. It was agreed that the venue of subsequent TICAD Summits should alternate between Japan and Africa, in order to emphasise the growing African ownership in the TICAD process. The interval between summit Meetings was also shortened to three years.

The timing for TICAD-VI could not be more perfect. 2016 marks the first year of the implementation of the 2030 Agenda for Sustainable Development and the first Ten-Year Implementation Plan of the Agenda 2063. In addition to a strong focus on trade, investment, industrial, economic and sustainable development, TICAD VI will also focus on African youth empowerment, enhancing Africa’s ownership of development initiatives, gender equality and women’s rights, maternal and child healthcare, the refugee crisis, climate change, and the peace and security building process within the African continent.

The highest-level representatives from both African states and TICAD partners is anticipated at the TICAD-VI, with over 6,000 prospective participants from Africa and Japan and various international organizations attending the Summit.