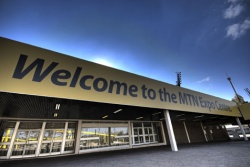 The first African Music Concert is scheduled to take place on November 21st at the Expo Centre in Nasrec, Johannesburg. Two Zimbabwean musicians, Simbarashe Anziva Tagwireyi, popularly known as Simba Tagz, and DJ Ray Dizz are set to perform at the opening. Simba Tagz and DJ Ray Dizz have worked together for a long time.

Those two talented musicians will share the stage with the continent's biggest acts such as, Davido, WizKid, Cassper Nyovest, AKA, Bucie, Burna Boy, Uhuru and Roberto among others. Earlier this year the duo collaborated in the high energy track dubbed "Party", whose remix video features scenes from a tour that was held in Las Vegas, United States. The African Music Concert is the culmination of a joint effort between South Africa's The VAS Company (TVC) and Nigeria's Mcomm Solutions and Services Limited. The event was put together to showcase Africa's best young performing artists. Last year DJ Ray Dizz won the Miller Soundclash competition walking away a prize of a trip to perform in Las Vegas. He came out the winner in the competition after defeating some of most talented disk jockeys to the coveted prize. The competition consisted of three stages where the DJs had to submit a 10-minute mix that incorporated EDM, Afro House, Hip-Hop, RnB and Zimdancehall.

After winning Ray Dizz said it was his passion to fly the Zimbabwean flag high and share his vision with the world. "I am elated to have won and I look forward to representing Zimbabwe in Las Vegas. Hopefully this will be just one of many accolades that I will achieve in my career," he said. About the upcoming South African tour, Ray Dizz said he will do his best to show fans that he has the talent to thrill on the turntables. This inaugural concert that was created in honor of uniting all Africans will take place in Johannesburg and will move to different countries across the globe over the next 5 years.