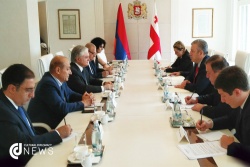 On August 1st, during an official visit to Tbilisi, Armenian Foreign Minister Edward Nalbandian met the Georgian President Giorgi Margvelashvili and the Georgian Prime Minister Giorgi Kvirikashvili to discuss how to strengthen ties between the two countries.

Meeting with the Georgian President, Edward Nalbandian expressed his gratitude for the reception and briefed him on the discussions held with other Georgian officials. These focused on the expansion of Armenian-Georgian cooperation, regional cooperation, the implementation of the agreements reached at the Summits in Vienna and Saint Petersburg by the OSCE Minsk Group Co-Chairs, and the advancement of peaceful settlements concerning the Nagorno-Karabakh issue.

During the discussions, the Georgian Prime Minister Giorgi Kvirikashvili stressed the centuries old friendship that ties the two countries and underlined the importance of deepening and strengthening such relationship. Matters of discussion were primarily centred on the cooperation agenda, namely the realization of agreements reached on high level, such as economic and trade cooperation, diversification of transport routes, cooperation in the energy sector, promotion of cultural exchanges, and development of tourism between the two countries.

The Armenian Foreign Minister and the Georgian Prime Minister discussed ways to achieve the preservation of the Armenian cultural heritage in Georgia and exchanged views on issues concerning Georgian citizens in Armenia. Moreover, they also stressed on the importance of strengthening cooperation with international organizations.