Asian Vocal Music as an Instrument of Cultural Diplomacy

A fascinating cultural experience through the Vocal Asia Festival 2016[edit] 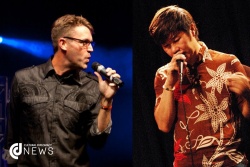 The Vocal Asia Festival (VAF) is one of the biggest international events in Asia dedicated to contemporary A Cappella music. It is organised by Vocal Asia, a fast growing Asian organisation for contemporary vocal music.Vocal Asia aims to unite the A Cappella communities around Asia and to create communication platforms for Asia's A Cappella musicians, singers and audiences.

The Vocal Asia Festival gives participants and audiences the opportunity to engage in a cultural and musical experience, to learn from not only the master groups invited by Vocal Asia, but also from each other. VAF is an annual music platform which was held for the first time in 2011 in Taipei (Taiwan). Since then, it has been held in a number of cities including Shenzhen (China), Taoyuan (Taiwan), Gwangju (Korea) and Shanghai (China).

From 17-20 August 2016, the sixth Vocal Asia Festival was held. The four-day event offered diverse performances and activities. The highlights included the Sound of Taitung Concert, which featured singers and bands from Taitung and other regions in Taiwan and the Sound of Asia Concert which featured select groups with great potential from Japan, Korea, China, Hong Kong, Taiwan and Singapore. The festival included also Aca Day, the day in which groups had the opportunity to share music with local citizens and tourists.

The organisers of the festival invited Michele Weir, one of the greatest vocal masters from the U.S.A., and the world-renowned A Cappella group from Cuba – Vocal Sampling, who shared the music from their homeland. One of the highlights of the festival was the performance of an all-male, six-member group from Cuba called "Vocal Sampling" featuring rich a cappella adaptations of traditional Cuban salsa music, son cubano, and Rumba. The audience had the opportunity to experience the most ancient A Cappella music in Taiwan - the Taiwanese aboriginal music.

In collaboration with local Kung-tung Technical Senior High School and Harvest 365 Foundation, the festival also hosted a cappella competition to encourage students to exchange and learn more about a cappella.

Music has the ability to improve intercultural communication, cooperation, tolerance and understanding between people in the world. Representation of the musical traditions of each country is a key factor for fostering good cultural relations and intercultural exchanges. Music is a universal language for communication between people and, as a result, platforms like the Vocal Asia Festival are being used and will be used in the future as instruments for promoting cultural diplomacy at the international level.