Baltic States In India: Back To Basics 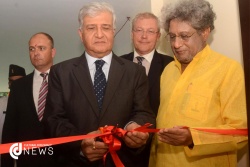 In Haridwar, northern India,the Dev Sanskriti private university opened the Research Centre for the Baltic Culture on August 7th, 2016. The Governor of the State of Uttarakhand Krishan Kant Paul, as well as ambassadors of Latvia, Lithuania and Estonia in India attended the opening ceremony.

The Centre for the Baltic Culture is expected to give insight in two main areas: Baltic languages, and the culture and customs of the Balts. The centre is temporarily headed by Professor Sigma Ankrava ,from the University of Latvia Sigma Ankrava.

In his opening speech, the Stat Governon highlighted the similarities between the Indian culture and the cultures of the Baltic countries. Dr. Pranav Pandya of Dev Sanskriti University welcomed the Governor’s remark, pointing out that in the Baltic culture, just as in the Indian one, gods and goddesses of earth and nature are worshipped. Indeed, the veneration of the sacred and eternal fire is still practiced in these countries.

The establishment of the Baltic center will not only strengthen the cultural ties between India and Baltic countries, but also encourage research and exploration of their heritage, which had remained suppressed in both regions due to the colonial administration and occupation. “This Baltic center will help foster and promote joint publications, joint development of learning resources, research activities and exchange of students”, he said.

The Governor, stressing the importance to establish harmony among people of the world and harmonize religion with science, claimed India’s role to spread the message of peace to the entire humanity. Since ancient times, the Indian culture had encompassed environmental conservation by encouraging nature-worship and rituals, which should prevent unbalanced exploitation of environment.