Bring Back Our Girls

The Situation of Human Rights in Nigeria 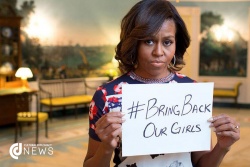 It happened 2 years ago, the 14th of April the kidnap of 276 girls in the school of Chibok in North Nigeria, a sad page that still echoes our memory. Indeed, it is not a matter of fact exclusively related to the Nigerian population, as it reveals the hatred of extremist Islamist groups towards the Western society. After 2 years, more than 200 women are still missing, and the leading group, Boko Haram, is nowadays considered not anymore a local threat for Nigerian people, but it is expanding to Chad and Niger, becoming the world’s deadliest terror group.

The violation of Human Rights is indeed an everyday concern in Nigeria, a theoretically secular country, as it occurs in different ways and it affects the whole society. The name Boko Haram in the region's Hausa language literally means "Western education is forbidden". Education is not accessible to everybody and it is filtered by Islamic rules and beliefs. Besides, women are not entitled to the same rights of men, as they do not share the same fundamental freedoms (their main role is the family and domestic tasks). Additionally, since 2013 a homophobic legislation, the Same-Sex Marriage Bill prohibits gay marriage and public affection.

The fundamentalist group Boko Haram is responsible for some of the major violations of Human Rights in these regions. Its main objective is the establishment of an Islamic state in Nigeria based on a strict form of Sharia law. The jihadists work through killing, bombing, social violence, and mass abduction, spreading atrocities all around the country. According to several Human Rights groups, Boko Haram has been accused of Human Rights violations, and also the local authorities failed in protecting the civilians, especially children and women. Besides, the government’s default in protecting the rights of Nigerian people shows a lack of structural organization within the system that led the most vulnerable individuals to become victims of outrageous facts and events.

There is still misinformation about the places and circumstances of the girls’ disappearance, and it is stated that since 2009 ,12 thousand people have been killed and 8 thousand have been injured or maimed. The intention of Boko Haram is selling the girls into slavery, and for this reason, terrorists got an unprecedented media attention. To this purpose, the campaign #BringBackOurGirls# is gaining support from all around the world, including the First Lady Michelle Obama. Unfortunately, this is still an issue and further investigation is needed.

Over the years, analysts have found visual evidence for escalating Boko Haram attacks in North-East Nigeria, North Korean labour camps, forced relocations in the Democratic Republic of Congo and have monitored the growing crisis in Darfur, Western Sudan.

Lately, Human Rights Organisations are building dedicated teams to monitor global injustices and conflict using this kind of tech. Amnesty has been particularly innovative in using satellites and drones – they’ve become a vital part of their human rights research and their success in getting their message out to a wider audience. The more evidence collected, the more compelling the case they put forward, and their work has had a global impact.

However, while the use of satellites has had a huge impact on the work of Human Rights Organisations, it is still limited as a research tool. In some cases the images might not be clear enough. For example, Democratic Republic of Congo is often very cloudy – and in many cases, the images just don’t exist. But these issues might change in the future. Christoph Koettl, emergency response manager at Amnesty International US says that there are interesting developments in this field: companies are starting to send smaller and cheaper satellites (micro satellites) into space. “They’re only the size of a shoe box, and the idea is instead of having two in space, why don’t we have 24 small ones, and have real-time monitoring of the earth.

“What that means for human rights monitoring is that instead of having a snapshot here and there, which is one of the biggest limitations, it moves in the direction of having more regular imaging of the earth so we can have much bigger archives and can do more detailed research.”