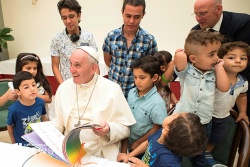 On Thursday 11th of August, 21 Syrian refugees, who currently live in Rome under the care of the Catholic Community of Sant’Egidio, were invited to have lunch with Pope Francis. Among them was a group of Syrians, who the Pope had taken aboard his plane as he came back from the Greek island of Lesbos.

The Holy Father invited 21 Syrian refugees to join him for lunch at his residence in the Vatican’s Casa Santa Marta, exchanging gifts, toys and drawings with the children. The Syrian families were brought to the Vatican City by Pope Francis after his day-trip to Lesbos, Greece in April. Pope Francis brought the first group back to Rome with him on April 16, and the second group arrived to Rome in mid-June.

During the meal, “both adults and children had an opportunity to speak with Pope Francis about the beginning of their lives in Italy,” an 11 August communique from the Vatican stated.

The first group of refugees, was made up of three Muslim families and numbered 12 people in total, including six children. Two of the families are from Damascus, and one is from Deir Azzor, a territory now occupied by the Islamic State. Their homes had been bombed.

The second group, which arrived in Rome in June and included two Christians, was made up of six adults and three children. They are all Syrian citizens who had been living in the Kara Tepe camp on Lesbos after making the perilous boat ride from Turkey to the small Greek island.

During the Papal visit to the island of Lesbos in April, the Pope said to the refugees: "I embrace you all with love. For you and those who care for you, I pray for God's gifts of courage and peace". The Pope’s heartwarming gesture has indeed changed the lives of these people, an example of generosity, fraternity and solidarity in a time of crisis.