This August the Third Chinese Arts Festival was held in Tunisia, as part of the Sino-Arab Cooperation Forum[edit] 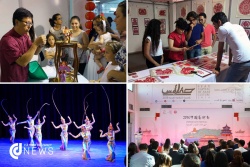 The Chinese Ambassor to Tunis, Bian Yanhua, addressed the opening ceremony underlining the importance of cultural exchange in cooperation between China and Tunis. In the past both countries have collaborated in the field of culture, thus helping to enhance their mutual understanding and promote cultural diplomacy at the highest level.

"The Chinese Art Week is a golden opportunity for the anchorage of Arabic cultural identity," said Houda Kchaou, Tunisian coordinator of this event. "Under the frame of Sino-Arabic Cooperation Forum, this international festival represents an important stage to build the solid cultural coordination thus to lay the stones for the common civilization connection," she added. In this way cultural relations between China and Tunis can be strengthened, and the fruitfulness of this cooperation will manifest itself in the cultural opportunities which will develop over the long-term.

This festival confirms once again that art is one of the most important tools of cultural diplomacy. It is a creative field which has the potential to bring people from two different cultures together, celebrating diversity and encouraging mutual understanding between people.