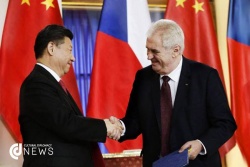 Xi Jinping, President of the People's Republic of China launched a three-day visit to Czech Republic on Monday 28th March 2016. It is the first visit of a Chinese president in 67 years, since the two countries established diplomatic ties. The visit of the Chinese delegation is part of China's policy of opening up towards the European Union. Prague will with this visit become a major financial center in Central Europe for business with China, which is their third-biggest trade partner.

On Monday 28th March, Xi Jinping met the Czech President Milos Zeman at the presidential chateau in Lany near Prague. They have signed a bilateral treaty of strategic partnership. "I believe that with the joint efforts of both sides, the visit will definitely be successful and it will lay the basis for the future development of China-Czech ties," Xi said in the statement. It is expected that visit will bring about 20 agreements, covering the fields of trade, infrastructure, finance, health, aviation, technology and culture and that could bring almost US$4 billion of Chinese investment to Czech Republic this year. During their two-hour meeting, the two leaders discussed bilateral ties and how Prague can help strengthen Beijing's relations with both the EU and the Central and Eastern Europe region (CEE). Zeman said the Czech Republic will help further strengthen China's relations with the EU and the CEE region, since the Czech Republic represents the first Chinese strategic ally in Central Europe.

During the visit Xi Jinping will meet Prime Minister Bohuslav Sobotka and heads of both houses of parliament and he will take part in a business forum and visit the Strahov Monastery in Prague as well.

There are many fields in which Sino–Czech relations can further enhance their cooperation. Besides economic and cultural cooperation there is also a great potential to advance regional cooperation and to promote people to-people contacts.