Addis Ababa: Meeting at the Headquarters of the ECA on the Sidelines of the African Development Week 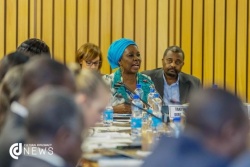 The African Development Week in Addis Ababa took place within the framework of a high-level ministerial dialogue chaired by Mr. Carlos Lopes - Executive Secretary of the ECA, with participants including Mrs. Zaineb Shasuna-Ahmed - Nigeria's Minister of State for the Budget and Planning, Mr. Maged Abdelaziz - Under-Secretary General of the United Nations and Special Adviser for Africa, and Mr. Anthony Mothae Maruping -Economic Affairs Commissioner of the African Union Commission. According to the Nigerian Minister, Mrs. Zaineb Shasuna-Ahmed, her country participates in all regional initiatives and will mainstream Agendas 2030 and 2063 into its new four-year Government development program under preparation in order to achieve growth, formalize the informal sector to broaden the tax base, ensure consistency of all national priorities with the two frameworks and use precise and relevant indicators to monitor the progress achieved for each goal.

For his part, Mr. Maged Abdelaziz harped on understanding the relations between the two programs prior to any reflection thereon. "In carrying out participatory and consensual preparation of Agenda 2063, Africa thus greatly contributed towards the preparation of Agenda 2030 on SDGs", he said. He then appealed to Africans to work harder to ensure coherence and harmony between these two frameworks for which the United Nations, the ECA and the African Union continue to work to raise funds. In the opinion of the African Union Commissioner, Mr. Anthony Mothae Maruping, "Africa has to implement the goals of Agendas 2030 and 2063 through national development plans". The Commissioner also emphasized that "agenda 2063 is already under implementation with 12 goals for a start, and thus there is need to intensify actions mindful of the continent's available resources, given that the goal is to achieve sustainable, lasting and structurally transformative economies".

For Ministers and country Delegates, their interventions focused on data partnership and its importance, indicators, strengthening community institutions, technical assistance to post-conflict countries and the need to have information at all times on agenda 2063. At the end of the high-level Ministerial dialogue, Mr. Carlos Lopes made a strong appeal to African leaders to deploy huge efforts to mobilize domestic resources to tackle Africa's development challenge.