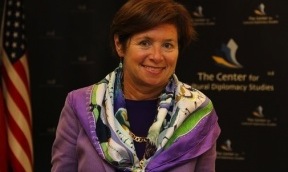 The ICD Annual Conference on Cultural Diplomacy in the USA

An American diplomat, and former Ambassador to the Netherlands. She is currently a professor in the Practice of Diplomacy for the School of Foreign Service of Georgetown University. Her fields of expertise include public and cultural diplomacy, military affairs, arts, the media, international affairs education, and biotechnology.

Cynthia P. Schneider teaches, publishes, and organizes initiatives in the field of cultural diplomacy, with a focus on relations with the Muslim world. For the Brookings Institution she leads the Arts and Culture Initiative within the Saban Center for Middle East Policy. Schneider teaches courses in Diplomacy and Culture in the School of Foreign Service at Georgetown University, where, from 1984-2005, she was a member of the art history faculty. Schneider publishes and speaks frequently on topics related to arts, culture, and media and international affairs, particularly the Muslim world. Her writings range from blogs for the Huffington Post and CNN.com to policy papers for the Brookings Institution. She held a Research Fellowship from the USC Center on Public Diplomacy to write the paper, ‘Public Diplomacy and Culture in Afghanistan and Pakistan.’ From 1998-2001 she served as U.S. Ambassador to the Netherlands. In 2001, she was awarded the Office of the Secretary of Defense Exceptional Public Service Award (highest civilian award given by Pentagon, in recognition of support for the U.S. military during ambassadorship). Schneider serves on the Board of Directors of Wesley Theological Seminary and Imagine Schools, and the Advisory Boards of the Institute of Cultural Diplomacy, the Sustainable Preservation Initiative, Books Without Borders, and Singapore Technologies Telemedia (ST Telemedia) Eircom Advisory Board.

Schneider received her B.A. and Ph.D. from Harvard University.

The ICD Annual Conference on Cultural Diplomacy in the USA 2013