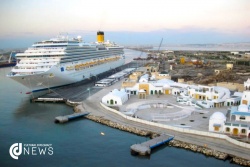 Looking out over the Mediterranean, La Goulette, a suburb of Tunis, has historically been a haven of religious diversity. Its residents are proud of its mosques, church and synagogue, which are stand as a testimony to the peaceful co-existence of different religious communities in the town.

La Goulette - derived from the Italian word for throat, ‘’gola’’ – rises from the banks of a canal, connecting the Lake of Tunis to the Gulf of Tunis. Its strategic position has made it the envy of many throughout the ages, notably the Ottomans, the French, Spanish and Italians. As a result, the area has long been a lively, cosmopolitan center and maritime trade hub. Arab-Muslim, Christian and Jewish communities, have lived and worked alongside one another here for centuries.

In this vibrant context, a fusion of cultures has become visible in cuisine, language and clothing and is particularly evident in Judeo-Arabic and Tunisian cuisine. Jews and Muslims both have a variant of a popular bean and spinach stew, known as Pkaila and Matfouna respectively.

A dialectical form of Arabic incorporating Hebrew and Italian words, Judeo-Arabic has been spoken by generations of Tunisian Jews and was even used by eminent theologians such as Maimonides. Local schools in La Goulette were also a place for young Jews, Christians and Muslims to meet, play and exchange, mainly in French, the lingua franca. Férid Boughedir’s 1996 film, ‘’A Summer in La Goulette’’ is an homage to this cultural fusion.

Yet, this tolerant and peaceful co-existence has not escaped recent political tensions; particularly due to the wave of post-Ottoman Arab nationalism, decolonization and the Arab-Israeli wars. In less than half a century, two millennia of Judeo-Tunisian culture virtually disappeared. This is what has led Gilles Lellouche, Tunisian Jew and native of La Goulette to found Dar El Dekra (‘’The House of Memory’’), which aims to commemorate Judeo-Tunisian heritage and encourage the renewal of a peaceful co-existence between Jews and Muslims in the country.

In an interview with French Newspaper, Le Monde Afrique, Mr. Lellouche recalls that ‘’a strong sense of trust reigned amongst Jews, Christians and Muslims’’. Mr. Lellouche is adamant about ‘’showing Tunisians that the Judaic heritage is also theirs and also lies at the heart of the Tunisian soul’’. To do so, Dar El Dekra consists of a museum dedicated to the Jews of Tunisia. It also offers film screenings, conferences and a whole host of musical, artistic and culinary events celebrating Judeo-Tunisian culture.