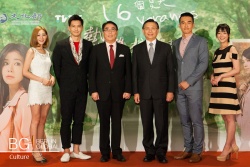 A second Taiwanese TV drama is about to be on screen in 10 Latin America countries next month. Taiwan’s Ministry of Foreign Affairs (MOFA) together with Ministry of Culture (MOC) has been making efforts to present Taiwan to the international stage with culture. The TV drama “The Way We Were” will introduce Taiwan’s pop culture to Latin America.

To promote cultural exchange with Latin American countries, the first Taiwanese Drama series “The Fierce Wife” was televised last year (2015). According to MOFA, it was a great success; the audience praised it with enthusiasm.

The Storyline of “The Way We Were”, also known as the “16 Summers” narratives the story of friendship and love over the span of 16 summers. Each episode is related to important historical events, music and style of the year, focusing on the change of time. The series won the Golden Bell Awards in 2015, Taiwan’s equivalent of the Emmy Awards, for best TV series, best director and best supporting actress.

Jeremy Liang Horng-sheng, acting director-general of the MOFA’s Department of International Information Services, said that the drama was broadcasted for its culturally representable storylines as well as its outstanding high quality.

He implies that culture and art are a form of soft power. He also noted that Taiwan must present its rich culture on the international stage. MOFA will continue to promote it further, collaborating with organizations in the private sector.

Starting from September, “The Way We Were” series will be broadcast in Spanish in 10 countries including El Salvador, Dominican Republic, Guatemala, Honduras, Nicaragua, Panama, Paraguay, Argentina, Colombia and Mexico.