Eastern European and the Middle Eastern Movies in Berlin 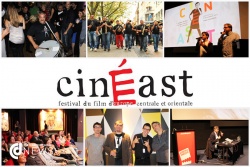 This weekend Berlin hosted a festival of short films from Eastern Europe and the Middle East. 12 countries met in Berlin thanks to the support of European union and Kühlhaus Berlin. The festival showed 15 movies in 4 sets on Friday and Saturday.

CineEast served as a platform for filmmakers from Eastern Europe and the Middle East to introduce their work to public outside of their countries of origin. Despite that this was the first year of the festival, more than 800 movies were submitted. From these the festival's director Katrine Majlund Jensen chose 15. These movies represented Eastern Europe and the Middle East in their artistic creativity.

The program itself was focused on artistic quality, which meant great diversity for the festival. Both regions and genders were represented equally. The program included student films as well movies that were in the Berlinale or in the world´s most important short film festivals.

However, there is not only the artistic message behind the festival. The director's reasoning behind the choice of regions is very simple - “last summer (2015) some media's coverage and some politicians rhetoric about the escalating migrant crisis in Europe became oriented almost only towards a question of numbers. This is relevant and an inevitable discussion, but for my part it increased an urge to dwell into the background of the regions that were in the spotlight”.

The festival aimed to shape forming ideas about other people's cultures and understand what does it mean to be human and be situated in society . Art is the ultimate interpretation of these topics and film is a very accessible art form, as well as a medium that a lot of people are familiar with.