Embassy of Argentina in the United States Pays Tribute to Borges 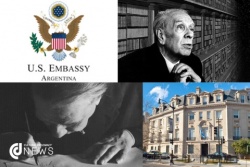 Jorge Luis Borges is one of the most popular writers, not only in Argentina, but worldwide. His way of writing has influenced many of the current writers, who now want to remember him by discovering key aspects of his life and work.

The Embassy of Argentina in the United States has organized an event dedicated to Jorge Luis Borges, an Argentinian writer well known worldwide and one of the best in the Spanish language. During the event, artists will show the Borges’ influence on other writers and how they have applied his style to their own creations. An expert panel discussion will be held during the tribute. Paula Alonso, Professor and Director of Latin American and Hemispheric Studies at The George Washington University, is the chosen one to moderate the debate with the title ‘Borges and his legacy’, which will touch upon the key elements that make Borges such an important writer.

This is not the only thing that is prepared during the whole conference. The screening of the movie ‘Los libros y la noche’ (The Books and the Night), directed by Tristan Bauer, will highlight the special approach of the Borges universe, which is still evident today. In addition, professors from all over the United States are coming to expose different topics that are essential to understand the way he expressed himself.

Laura Demaría will be in charge of touching "Borges, the Other, and I: Reflections on Ethics”; Sergio Waisman, professor at George Washington University will talk about "Translation and Tradition: A Borges for the Future” and finally, Todd Garth, professor at the United States Naval Academy, will deal with the topic ”Borges and Macedonio. The Local and the Universal”. However, the presence of his widow, Maria Kodama will provide a closer view on how he lived and thought through a conversation that will take place at the US Library of Congress. Finally, during the last day of the event, many personalities will read fragments of the Borges work at the Embassy of Argentina in the United States.

This event begins on December 6th and runs until December 8th and is organized by the Embassy of Argentina in the United States.