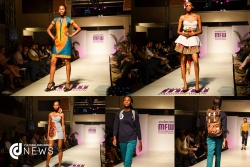 Francesca Ricaldi brings together Mozambique and Italy in her latest creation. The idea came from her experience in 2014, when she won a fellowship with Leonardo Business Consulting in Maputo, Mozambique. Today, Francesca sells her clothes to expats in Mozambique, displays her latest creations at fashion shows and unites two different clothing cultures in a new and modern way.

The Capulana is a traditional cloth worn in Mozambique and most parts of central Africa. Despite having been introduced only two centuries ago, today it is impossible not to associate this cloth with African fashion. It is one meter long and two meters wide, with infinite color and shape combinations.

Francesca, as soon as she arrived in Mozambique after her graduation in Law studies, fell in love with capulana, and soon decided to tailor it to European tastes. Her idea became extremely popular in a short while, so she decided to produce dresses by commission and sell them. When Ice, or the Italian Institute for Foreign Commerce, found out about her activity, it immediately decided to sponsor her.

Thanks to Ice, in 2014 Francesca was able to participate to Facim, a local fashion show. However, her popularity rapidly increased after she attended to the Mozambique Fashion Week in Maputo in 2015. After the show, the demand for her clothes skyrocketed, so much that Francesca hired two trusted tailors and even decided to launch her own brand, taking advantage of the fame Italian brands have worldwide.

Her major customers are expats living in Mozambique, who love African culture but still want to dress with European style. Her business has thrived so much that she has decided to further her studies in Business Administration in Barcelona, hoping that further knowledge in business and management will benefit her enterprise in the future.

At the same time, she has not stopped her venture, and although slowed by the long distance, Francesca keeps making her own creations, uniting The Italian sense for fashion with the African vivacity of colors.