From Dirty to Drinkable Water Thanks to a Cactus 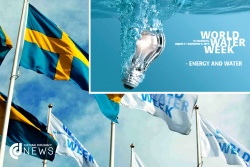 Three young Mexican students, worried about the lack of drinkable water for many people in their country, created a substance based on Nopal (an indigenous cactus) slobber, which is able to purify water. What started as a high school project will take the three girls to represent Mexico in Europe along with other similar projects from all over the globe, trying to win the so called "Nobel of Water", between the 1st and 6th of September in Stockholm.

Clarissa Camargo Tapia, Julisa Guadalupe Lugo Pacheco and Doryan Brenda Laura Callejas won the first place in the Junior Water Prize awarded by the Swedish Embassy in Mexico and the Mexican Academy of Sciences. This award will give them the opportunity to compete for the "Nobel of Water ", the prize awarded by the Stockholm International Water Institute to the best projects of sustainable water management.

The three students of the College of Science and Technology Studies of Hidalgo in the Mezquital Valley, were inspired by the techniques of the region to purify water with Nopal, so they decided to study the benefits of the plant’s mucilage to find a solution to the pollution of what is a vital but sometimes rare liquid in their communities.

After two years of research, the group created a technique to extract the Nopal mucilage, in which the fiber of the cactus is eliminated with acetone and then dehydrated to obtain a purifying powder. The effectiveness of the powder was compared to that of aluminium sulphate, one of the substances most commonly used to purify pool water and to prevent the formation of germs and algae in industrial water.

The mucilage was as effective as aluminium sulphate. However, in this case, "the costs are very low and the final product is 100% sustainable, with only 1.2 grams of Nopal mucilage powder, which by the way grows in abundance in the country, we can purify a litre of water," said Blanca Olguin, the leading professor of the team.

The Junior Water Prize has been taking place for 14 years in Mexico, and has established itself as one of the most important programs to include children under 20 years in the sustainable development field. The best ideas are being put forward by the UN in order to solve the enormous problems that we face regarding our environment.

In addition to an economic incentive of 40 thousand pesos, the students, who have between 16 and 17 years, will travel to Sweden to participate in an international competition to be held during the Water Week in Stockholm from September 1st to 6th this year.

Meanwhile, the students are still working to obtain the patent for their project. They assure that it can be developed at a domestic level, and although it has not yet been studied on a large scale, its creators hope that soon this new water-cleaning powder may be marketed throughout the country.