From Scotland with Love, Celtic and Rangers

Two Football Clubs Respond to the Refugee Crisis by Donating Two Ambulances to a Greek Island, in Order to Save Thousands of Refugees who Arrive there Daily 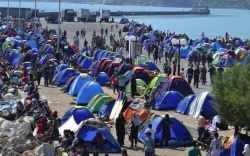 The football teams Celtic and Rangers have been touched by the refugee crisis. So, they decided to act and help by sending two ambulances to a Greek island, where thousands of refugees arrive daily, seeking asylum in Europe.

The two football groups of Glasgow paid about £35,000 for two emergency response vehicles that crossed almost the whole of Europe from Scotland, to one of the eastern parts of the EU on the island of Lesbos, in the town Sykaminia. Ambulances will provide immediate medical care to refugees in need.

The CEO of Rangers, Peter Lawwell, said: "I would like to thank all of our supporters who have contributed and made this possible." Rangers managing director Stewart Robertson added: “We have all been moved by the images we have seen from the refugee crisis and on behalf of Rangers Football Club and the Charity Foundation I am delighted to support a project that will provide practical help to those fleeing from Syria.”

Anas Sarwar, former deputy leader of the Scottish Labour Party, also travelled with the ambulances. He said: "We set up the Glasgow Cares appeal with the ambition of raising money and delivering the ambulances within two weeks. Because of immense generosity in large part from Rangers and Celtic, we have been able to deliver a week ahead of schedule. The need is urgent, every day counts. "

The ambulances will be crewed by Greek health professionals and will also be used to transport locals on Lesbos.