From a Refugee to a Queen 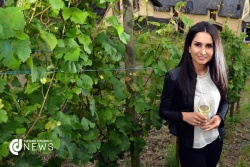 She doesn’t fulfill the stereotype of the blond German wine-grower in dirndl – but she knows a lot about wine. Syrian refugee Ninorta Bahno is the first asylum-seeker to be crowned a wine queen in Germany.

The tradition of wine queens in Germany dates back to the 1930s, though it was institutionalized in the 1950s.

For many years, wine queens were seen as the epitome of the beautiful, traditional, well-behaved German girl in a dirndl. Early on, the selection process for German Wine Queens resembled that of a beauty pageant. It called for dancing the waltz, and participants had to come from a family of wine-growers.

Ninorta Banho, 26, is the first asylum-seeker to be chosen to represent a wine-growing region — a practice that dates back to the early 20th century when selected women would wear traditional dirndl dresses.

She said that she hoped the prize would encourage integration. "I want to show that Germany is a welcoming country and that the Germans are very hospitable and work towards integrating refugees quickly and successfully," said Ms Bahno, quoted by Deutsche Welle. "As a refugee, it's very difficult to integrate into a new place at the beginning."

Peter Terg, chairman of the Trier-Olewig wine-growers association, told Reuters: "You have to have a bit of courage to ask one of the refugees. I wanted to send a message by doing that."

Every September, the wine queens from German's 13 wine regions compete for the title of German Wine Queen.

This year, the 2016 German Wine Queen will be crowned in a televised ceremony on September 30 in Mainz. While the event traditionally takes place in Neustadt an der Weinstrasse - on the German Wine Route in the Palatinate region - it has been moved to Mainz this year to mark the 200th anniversary of the Rhine-Hesse region.