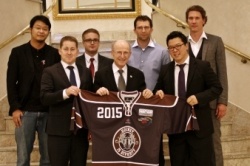 From August 21st to 27th, the SISEC Hockey Academy Calgary youth team travelled to Berlin to take part in the Hockey in Diversity competition.

Hockey in Diversity (HID) is a nationwide initiative of former and current German amateur and professional ice hockey players, and players with and without a history of migration. Founded in 2010 by Martin Hyun and Peter Goldbach, HID is an ice hockey group that helps integrate people by using the sport. Hyun explains his motivation for the concept as “the sport [ice hockey] has opened doors to the world and to people who would otherwise have remained closed to me”. Every year they hold a competition, where different countries can get together and play ice hockey whilst also getting to know different cultures. HID involves all ice hockey teams in Germany to get other groups to play, letting them take the initiative of whom to invite.

The SISEC Hockey Academy is also no stranger to cultural diversity, it was founded with the intention to help bring European ice hockey players to Canada so they could pursue their ice hockey dreams. This year, marked the first time the SISEC Hockey Academy Calgary has made the trip to Berlin to participate in the HID competition. This year, the tournament was organized by the Eisbären Juniors, an ice hockey team based in Berlin. Since 2013, the Eisbären have made many trips to Canada and to the SISEC Hockey Academy, so for SISEC to make their way to Germany was a very special moment, according to the Eisbären team manager. The Canadian Deputy Head of Mission Jennifer May, dropped the first puck at the final game of the competition, where SISEC and the Eisbären played, with SISEC winning 5:4, after a penalty shoot-out. The tournament was enjoyed by all, and SISEC looks forward to hosting more teams from Germany in the future.