Giving Hope through the Provision of Education in â€˜Dumpster Communitiesâ€™

The Mexican company, Cruz Azul, is connecting donors to help provide a better education and future for unprivileged children[edit] 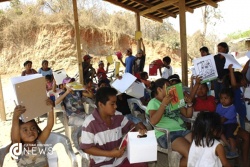 Generally communities or colonies that are located closer to dumpsters are in a poor condition. This, in addition to limiting its development, can result in health problems, increased levels of violence and a lack of opportunities for inhabitants. Children are especially vulnerable in these situations, which is why since 2009 different hotels owned by the Mexican company, La Cruz Azul, have been working to promote and coordinate a culture of donations between its international clients and suppliers. This is a very special model of cooperation, which ultimately aims to ameliorate the educational conditions of unprivileged children in the State of Guerrero (MX).

In the state of Guerrero, next to the tourist resort of Azul Ixtapa (which belongs to the Mexican company, La Cruz Azul) there are several communities that require support. Among them is a school located in a municipal landfill. As a result the hotel has been promoting a culture of donation since 2009, with employees, businesses, and all guests interested in contributing.

Staff working at the hotel felt inspired to launch the project upon seeing the run-down condition of the school facilities, and decided to try to mobilise support in order to better facilitate education in the area. Following the construction of a new floor and several overall improvements in the school, the project has succeeded in creating a clean and safe space for teaching classes, thus enabling students to pursue their basic education in better conditions.

As a direct result of the project, the school has seen a yearly enrolment of 30 children, who have regularly attended classes. On average 18 primary school pupils and 4 secondary school pupils graduated. To further explain the role of the company in the project, two young high school graduates are currently working within the hotel, one as a Steward and the other as an Assistant to Public Relations.

The project, although managed by the Hotel Azul Ixtapa, has received support from a wide range of companies and hotel customers from around the world. External companies, such as Probiomed Laboratories, TAKEDA and Bonafont, have funded the delivery of bicycles to students, the latter also donating bottled water. In addition, Starbucks, Group Stendhal, RIMSA and Quality Service have donated school supplies and groceries. The RIE Foundation provided 60 pantries for families living in the community. The hotel has also succeeded in involving hotel providers. Beta Processes are donating antibacterial gel dispensers and cleaning products, and FUMYLIM are periodically spraying the buildings in order to control vermin in the school.

From the private donors, of particular significance has been the collaboration with Mr. David Lemon, currently residing in Los Angeles, who has awarded 13 scholarships to support those studying computing, and donations of over $ 50,000 for the purchase of supplies and materials.

The actions mentioned above benefit the community by fighting against the educational gap, boosting basic education for students, and pushing for the personal, educational and professional development of children, which equips them with the skills to seek a better future. In this way the hotel serves as an agent of economic change, improving social conditions in an area with a high level of poverty.