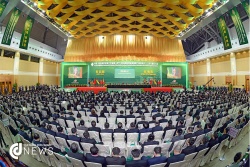 This weekend, April 9th and 10th, the Guinean capital, Bissau, hosted the Forum for Economical and Commercial Cooperation between China and the Portuguese Speaking Countries. This event was the meeting point of Chinese and Portuguese speaking countries' agencies and entrepreneurs, with the aim of reinforcing the economic bonds between these nations.

The Forum had its official opening with the Guinean President, José Mário Vaz, speech. He declared that he hopes for a collaboration between these economic agents, to help develop Guinea-Bissau's economy. Also, to get the investors attention, he promised more politic stability, as well as the normal functioning of the democratic institutes, from now on.

Addressing directly to the Chinese entrepreneurs, José Mário Vaz emphasized the fact that Guinea is “excited” to build a strategic partnership with China. He said “We believe that the dynamic and quality tools that China can provide on several fields will help to strengthen the ongoing national economic development.”

For the other side, China's Ambassador, Huang Hua, declared that the Chinese investment is expected to grow, but there needs to be political stability for that to happen. It was explained that China has all the technological conditions, and financial resources to put thousands of Chinese entrepreneurs in Guinea, but there's also still missing a business platform to enable business. In other words, China is ready to support the economic development of Guinea, while working side by side with the Guinean agencies.

There will be a joint committee between China and Guinea-Bissau, although the date hasn't been published yet. Anyhow, the aim is to transform Guinea into a platform for the Chinese investment in Western Africa, especially to work in a connection with Macau. As it was explained by Bruno Jauad, one of the promoters of this weekend event, “the goal is to put Guinea in the Chinese investment route”, because, although there's a strong Chinese presence in other African countries, it is still small in Guinea-Bissau.

On Saturday, the 9th, each country was represented by presenting initiatives on their own field of investment, as well as the politics followed on the major sectors for economic growth, like agriculture, fishing, agro-industry, and tourism. On Sunday, the 10th, they discussed investments in energy, infrastructures and the mining sector.