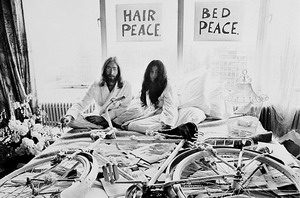 Knowing that their wedding on March 20th, 1969 would draw huge media attention, the celebrity couple staged a weeklong sit-in for world peace from their honeymoon suite in the Amsterdam Hilton hotel. Reporters from all across the globe were invited to attend the event, at first not knowing what to expect. However when the pair began their alternative protest, refusing to leave their bed or cut their hair, the world's media spread the interviews, photos and video material of the event and made headlines worldwide. Whilst the 'Bed-Ins' did not achieve much in the way of ending the Vietnam War or bringing about world peace in general, it did succeed in raising global awareness and ultimately resulted in the creation of the famous 'Give Peace a Chance', the song which then went on to become the anthem of the American anti-Vietnam movement. To this day, the concept of 'Bed-Ins' remains ingrained in "Popular Culture|popular culture" continuing to be re-interpreted and re-used as symbol of peace.