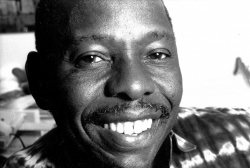 Ken Saro-Wiwa was executed by a former military regime in Nigeria for fighting for the rights of the Ogoni. 20 years after his judicial murder, people in the region are still not benefitting from oil revenues.

20 years after Ken Saro-Wiwa's death, what happened at his grave shows how divided this society is. Almost everything is about money. The writer Ken Saro-Wiwa co-founded MOSOP, short for the Movement for the Survival of the Ogoni People, in the 1990s. The group argued that oil production had devastated the region's environment, while bringing no benefit to its 500,000 people. Saro-Wiwa said that Shell had turned what was once an area of unspoilt natural beauty into a grubby black moonscape. Oil from dilapidated pipelines and pumping stations seeped into the soil and destroyed it. For local residents, Nigeria's oil reserves hadn't brought affluence, just poverty and disease. The Ogoni took up the peaceful fight against Shell and the military regime of Nigeria. In 1993, Shell abandoned Ogoniland and has not been back since.

This triumph turned Ken Saro-Wiwa and his acolytes into a real menace for General Sani Abacha's military dictatorship. He had the writer arrested in 1994, allegedly for being responsible for the death of four Ogoni tribal leaders. Saro-Wiwa was hanged on November 10, 1995. He became a symbol for environmental protection and the human rights. At the activist's grave the young people only leave after we buy them a couple of drinks. Harry asks us to excuse their behavior. He is seconded by Iddi Zobare Deboge, a sociologist at the University of Applied Sciences in nearby Bori. "The oil industry here didn't help. It doesn't create any jobs for young people." The locals used to be fishers and farmers, but oil extraction ruined the environment.

In 2011, the United Nations published a report putting the cost of cleaning up the area at a $1 billion (931 million euros). Removing all the damage will take 30 years. Igo Weli, spokesperson for Shell Nigeria, explained the company's stance on the clean-up. "We are working with the government to start implementing measures as soon as possible. We want to help - and be part of the solution," he added. That is something many Ogoni doubt very much. The human rights agency Amnesty International accuses oil groups of not doing a thorough job of cleaning up the environment.