The leadership of Instituto Cervantes met to discuss and develop a new strategy for the coming year, as well as to celebrate two significant anniversaries[edit] 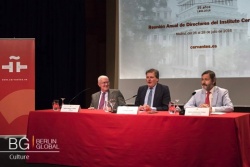 The leadership of Instituto Cervantes, under the supervision of Spanish Minister of Education, Culture and Sport, Mendez de Vigo, met in Madrid to discuss the strategy of the organisation created to spread knowledge about the Spanish language and culture, as well as to commemorate two important anniversaries.

Spanish Minister of Education Culture and Sport, Mendez de Vigo, held an annual meeting with Instituto Cervantes directors in Madrid between July 26th and 28th 2016. The main purpose of the meeting was to outline a strategy for the future. The heads of seventy Spanish language cultural centers from around the world were present, led by the director, Victor Garcia de la Concha and the secretary general, Rafael Rodriguez-Ponga. One of the working sessions was attended by Her Majesty Queen Letizia of Spain.

Mendez de Vigo reminded participants that 2016 marks 400 years since death of Miguel de Cervantes y Saavedra, the Spanish soldier, poet and author of the celebrated Don Quixote, after whom the Institute is named. This year de Vigo expects a reflection on this anniversary, as well as heightened effort to use the “enormous potential” and “capabilities” of Spain and its culture, which can be shared and exported around the world. In addition to the 400th anniversary of Cervane’s death, it is also 25 years since the creation of the Institute, which promotes Spanish language and culture throughout the world.

Minister de Vigo also stressed that for many people around the world the Instituto Cervantes is “the first port of Spain”, where people unfamiliar with Spanish culture can see and learn about it.