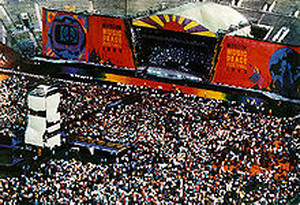 Organised in 1989, the Moscow Music Peace Festival was a one-time campaign to promote world peace and to mobilise international cooperation to fight drug war in Russia. It was a gathering of high-profile hard rock and heavy metal bands, including Bon Jovi, Ozzy Osbourne, the Scorpions and many others. The festival was also a manifestation of enormous social change sweeping through the Soviet Union and its opening up to the West, effectively marking the end of Cold War.

The Moscow Music Peace Festival is an example of cultural diplomacy where music plays an important catalyst in building bridges between the East and the West and unites people to campaign for a common purpose.