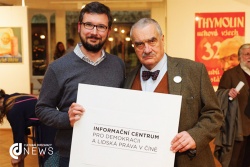 Peoples Republic of China is extremely complex country. It is the second largest economy in the world, it is rapidly modernizing and what is more, in recent decades China could raise the living standards of hundreds of millions of its inhabitants. At the same time, there is still a rule of one-party regime, with such ruling the Czech Republic had in the past a very negative experience. Indeed, it should be stressed, the Czech Republic, the former Czechoslovakia witnessed nearly for 50 years the rule of totalitarian regimes. First, there was a Nazi regime from 1938 till 1945, than communist dictatorship from 1948 till 1989. These regimes had profound societal and cultural consequences on the Czech and Slovak nations. Likewise, there are permanent violations of human rights in China, freedom of speech is restricted and the status of religious, cultural and ethnic minorities, despite constitutional guarantees enshrined, is highly problematic.

The mission of the freshly opened Information Centre in Prague for Democracy and Human Rights in China is therefore to encourage open debate on the situation in the People's Republic of China, to allow the Czech public to familiarize itself with this situation better and create its own critical opinion about. As part of activities, supported by the Information Center, there will be exhibitions, lectures, discussions in schools and roundtables on topics such as the current political situation in China, the recent developments in Tibet, Hong Kong or Taiwan, the human rights situation and the fate of political prisoners, development economy, China's relations with its neighbors, the situation of ethnic or religious minorities, or activities of Chinese civil society. Meetings and cultural events will be organized by partner organizations of the center, which will co-ordinate with each other and will organize the contents and programs.