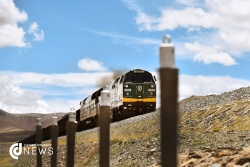 The Himalayas is a spectacular region with great cultural diversity due to its wide variety of people and languages. The cultural differences in the Himalayas stem from its diverse climate and terrain. The mountains have an effect on people’s living and the ways in which they communicate. Yet they also act as a physical barrier, obstructing cultural understanding between the people and isolating different cultural traditions.

In 2006, China built a railway more than 1100 km long in Tibet. The railway is significant for transport and life in the country because it connects Tibet with Qinghai Province. Ten years later, China wants to extend the railway network in the Himalayan region because it will be of major significance for accelerating the cultural, social and economic development between China, Nepal and India.

The planned railway will start from Xigaze, a city in Tibet which lies 3800 meters above sea level. It will pass through the land port of Gyirong on the Chinese border, at 2800 meters above sea level, before continuing into Nepal and then India. This railway will allow Tibet to become an economic and cultural centre that will connect China with South Asia. China is also considering a rail link between Nepal and Yadong, a Tibetan county close to the Sikkim border. In the future it can also be connected with India.

The altitude differences in the region will not be a problem for building better transport networks between the most culturally significant areas in the Himalayas. China has already built a railway network in the Lhasa region of China, which lies at 3700 meters above sea level, and is experienced in the building of high mountain railways.

India is the third-largest economy on the Asian continent. China is the largest economy in Asia and this trans-Himalayan railway will have essential role for the better cooperation and development of all countries that this rail link will pass through.

The Himalayan region where China, Nepal and India are includes a considerable part of the world’s cultural heritage. Building better communications between these countries will encourage cultural exchange and reduce the remoteness and inaccessibility of the region. A common railway between China, Nepal and India will have a positive impact on the representation of their cultural diversity.

The Himalayan region is unique because there are different religions, beliefs and traditions. The new railway will be an opportunity for the development of better cultural understanding in the region. It will be easier for people to travel, and they will have the opportunity to build new intercultural connections between one other.