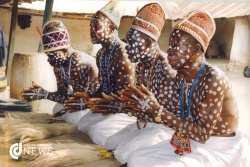 The two-week event has started on Friday 19th August in Osogbo Grove. Despite its strong local character, the festival gains more and more popularity among international travellers. People from Cuba, Brazil, Trinidad and Tobago, Jamaica, Spain, Canada, and the United States attend the festival to participate in this unique event and get to know Nigerian culture from a different angle.

Osun Osogbo is one of the most ancient traditions in Nigerian culture. Established in 1370 by the people of South-West Nigeria to uphold the tradition their fore-fathers, today it is perceived as a National Founder’s Day. The festival is built around the relationship between the goddess of river Osun, who is believed to have founded the town of Osogbo, and the first monarch of the Oshogbo kingdom.

Worshippers of Osun attend the festival to receive the annual blessings for humility, dedication and steadfastness in humanitarian principles, although prayers are also dedicated to economic prosperity. Moreover, it is an occasion to all people of Osogbo Land both in Nigeria and diaspora assemble for meet and greet.

Despite its very local dimension, Osun Osogbo Festival has gained a world-wide popularity. Its rich cultural heritage was first recognized by Susanne Wegner, who since 1950s restored abandoned shrines. Not only she personally rebuilt some of Nigerian shrines, but she also got strongly involved in safeguarding Osogbo’s natural site, prohibiting hunting, fishing, and felling of trees in the grove. Thanks to her contribution the Osun-Osogbo grove was classified as a UNESCO heritage site in 2005.

Since then, the festival has acquired notoriety as an attraction for visitors from all around the globe. The event is sponsored by Nigerian Government and public institutions such as the Nigerian Tourism Development Corporation (NTDC). In addition, more and more private companies every year provide financial support and publicity to the event.

Numerous local traditions and cultural practices have disappeared under the influence of modern norm and foreign civilisations. The importance of Osun Oshogbo is in its power to remind locals of their roots and strengthen their ethnical and historical identity. Thanks to the international interest it is also a great tool of cultural diplomacy to promote Nigerian culture.