Palestinian Territories Came Together for a Rare Football Match 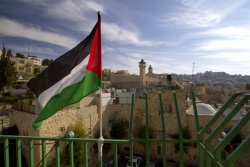 On Thursday August 6th, the separated Palestinian Territories enjoyed a rare moment of unity in a football match that brought together teams from Gaza and the West Bank. Al-Ahly, the top team in the occupied West Bank, traveled to Yarmouk in the Gaza Strip to face off with the coastal champion Shejaia in the first such visit since year 2000.

Some 7,000 fans packed Gaza's Yarmouk stadium, which was decked with Palestinian national flags. The game ended in a draw, which was probably a welcomed result amid efforts to heal the internal conflicts from a 2007 civil war between Palestinian President Mahmoud Abbas' long-dominant Fatah faction and the rival Hamas. "No matter who wins, Palestine wins," said Akram Hajjaj, one of Shejaia's managers, to Al Arabiya.

The teams will compete again for the Palestine Cup on Sunday in the West Bank city of Hebron, and the winners will play in the next Asian Football Confederation (AFC) Cup. According to Al Arabiya, Jibril Al-Rajoub, chairman of the Palestinian Football Federation, said he planned to form a joint league for Gaza and the West Bank.

Fatah and Hamas formed a unity government last year but divisions remain. Hamas retains de facto control of Gaza. Abbas holds sway in the West Bank, coordinating security and conducting peace negotiations with Israel. Israel occupied the territories of the West Bank and Gaza Strip in the Six-Day War of 1967, which had been earlier occupied by Jordan and Egypt respectively, and has maintained control of them since.