Pastel of Cultural Diplomacy: the UN, EU and Indigenous Peoples

"We will not achieve the Sustainable Development Goals if we fail to address the educational needs of indigenous peoples." — Ban Ki-moon[edit] 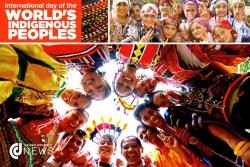 "On the occasion of the International Day of the World’s Indigenous Peoples, the European Union joins indigenous peoples…" and the United Nations "in celebrating the richness of their cultures and their unique contributions to the world’s cultural diversity, and reaffirms its commitments to promote and protect their rights."

Federica Mogherini, on behalf of the European Union, released a declaration which reiterates that killings and various abuses against indigenous people around the world are still ongoing.

As a consequence, " The EU is therefore stepping up its efforts to protect Human Rights Defenders working on behalf of the most vulnerable and marginalised, including indigenous peoples, and those campaigning on land rights issues."

"The promotion of cultural rights in accordance with the UN Declaration on the Rights of Indigenous Peoples is also at the heart of peace-building through inter-cultural dialogue, as set out in the new European Union Strategy on international cultural relations which was rolled out in June."

These declarations must be perceived as added value to what the United Nations has also taken into account. This years' theme for the celebrations around the globe centres around the peoples' right to education. Hinting once again the right of these populations to "establish and control their educational systems and institutions", conducting and "providing education in their own languages, in a manner appropriate to their cultural methods of teaching and learning" in key, say the UN officials.

Such rights are also included in the Universal Declaration of Human Rights and other closely related "human rights instruments". One of the goals laid down in the 2030 Agenda for Sustainable Development brings highlights the "equal access to all levels of education and vocational training for the vulnerable, including persons with disabilities, indigenous peoples and children in vulnerable situations."

These commitments represent the ongoing struggle of identifying the disparities between indiginous and non-indigenous populations "in terms of educational access, retention and achievement…"

Such declarations have been prominent on international agendas recently, as leaders have had the strength to recognise the " historical abuses, discrimination and marginalisation suffered by indigenous peoples".

However it also reflects the desire to further improve the given conditions, especially in terms of access to education.

Diplomacy and culture represent a unique blend within the field of international relations. And education is a true, devoted gateway towards understanding cultural sensibilities of people from across the world.

Communicating values and beliefs by means of diplomacy is a mechanism that involves responsibility and assuming certain decisions of the past, present and plans for the future.