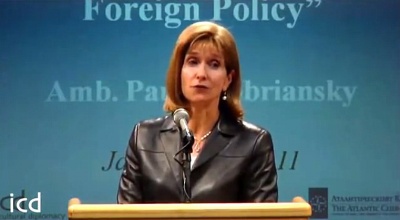 Paula Dobriansky was born September 14, 1955. She is an American foreign policy expert who has served in key roles as a diplomat and policy maker in the administrations of five U.S. presidents, both Democrat and Republican. She is a specialist in the areas of Eastern Europe and the former Soviet Union, and in political-military affairs.

Paula Dobriansky has had a remarkable career from politics to television hosting. She has worked as the Senior Vice President and Global Head of Government and Regulatory Affairs at Thomson Reuters from 2010 until 2012, as well as simultaneously being a Distinguished National Security Chair at the U.S. Naval Academy. Dobriansky was the longest serving Under Secretary of State for Democracy and Global Affairs in history, she served from 2001 until 2009; prior to this she was the Senior Vice President and Director of the Washington Office of the Council on Foreign Relations for four years from 1997-2001. Amongst this, her previous employment includes Associate Director for Policy and Programs at the United States Information Agency; Deputy Assistant Secretary of State for Human Rights and Humanitarian Affairs; Deputy Head of the U.S. Delegation to the 1990 Copenhagen Conference on Security and Cooperation in Europe (CSCE); Advisor to the U.S. Delegation to the 1985 U.N. Decade for Women Conference in Nairobi, Kenya; Director of European and Soviet Affairs at the National Security Council, the White House; Member of the Council on Foreign Relations; Chair of the National Board of Directors of the World Affairs Councils of America. On top of her political career, she also tried her hand at television hosting as the hosted ‘Freedom’s Challenge’ and co-hosted ‘Worldwise’ which are international affairs programs that are broadcast on National Employment Television.

Dobriansky is on the board of numerous organisations such as Freedom House, the Australian-American Leadership Dialogue, the American University in Afghanistan, Western NIS Enterprise Fund, National Endowment for Democracy (Vice Chair) and the George Mason University Board of Visitors.

Paula Dobriansky made a great contribution to the historic devolution of power in Belfast in 2007 as the President’s Special Envoy to Northern Ireland where she received the Secretary of State’s highest honour which is the Distinguished Service Medal for her leadership during her time there. Dobriansky is also part of the Fulbright Program and has been awarded the Fulbright-Hays Scholarship which is one of the most prestigious of its type. Amongst these, she has also received national honours from several countries such as the Star of Romania; Hungary’s Commander’s Cross Order of Merit; Grand Cross of Commander of the Order of the Lithuanian Grand Duke Gediminas and Ukraine’s Order of Merit.