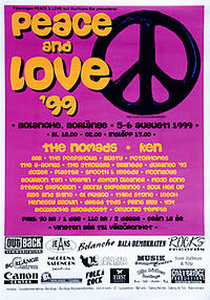 The Peace & Love festival was founded as a reaction to the ongoing violence and was first held in 1999 in central Borlänge, Sweden. The concept of the festival was to spread the message of diversity, solidarity and understanding. The whole idea was to bring cultures together, to cross borders and attempt to try get people to change their attitudes towards themselves and others. After the first festival attracted 900 visitors, the Peace & Love concert became one of Scandinavia's fastest-growing festivals, with over 25.000 visitors in 2008. Each year the festival focuses upon a specific subject which visitors should reflect about, past year themes were about topics such as : freedom of speech, democracy, freedom, and a new world. The festival can be seen as an historical act of cultural diplomacy resulting from the fact that the main concept was to bring cultures together and to spread the message of diversity, solidarity and understanding. The intent of the Peace & Love festival was to foster mutual understanding between nations and their people.