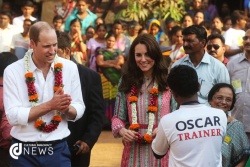 The Duke and Duchess of Cambridge began a seven-day tour of India and Bhutan on Sunday. So far the pair have visited the historic Banganga water tank in Mumbai and enjoyed a game of cricket, as well as attending charity events.

One of the higlighted events was the laying of the wreath at India Gate in respect to the victims of the Mumbai terror attack. That sad event occured at the Taj Mahal Palace Hotel, where dozens of people were killed during a three-day siege by Islamist terrorists in November 2008. They also met with hotel staff who helped protect guests during the attacks, Kensington Palace said on its Twitter feed.

They were very excited to visit the Taj Mahal, which was famously visited many years ago by late Princess of Wales, Diana, in a hope to create „new memories“.

At the Taj Palace they attended a Bollywood gala dinner, including many enertainers, in order to raise money for the charities and children they met on April 10th.

The royal couple chose to visit the slum in Mumbai to meet representatives of a charity called SMILE that focuses on giving skills and opportunities to young people and their parents. William and Kate were shown around the area by Anaxi Shah, founder of SMILE, which runs 14 schools and women's empowerment projects across several areas in south Mumbai. It was the proudest day of her life for Mrs Shah, SMILE's founder and president, who has devoted the last 20 years of her life to helping the people of the slum overcome their lack of opportunities.

The royal couple still has many things to do during their stay for the next several days, like meeting Indian Prime Minister Narendra Modi, visit to a health clinic for elephants, and meeting with the King and Queen of Bhutan.