Putin and Erdogan Initiated the Normalization between Russia and Turkey 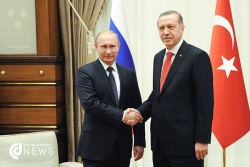 Vladimir Putin and Recep Tayyip Erdogan fostered last Tuesday relations between Russia and Turkey in St. Petersburg. The two presidents met to discuss the economic sanctions imposed by Moscow following the downing of a Russian plane on the border between Turkey and Syria.

After meeting for more than two hourswhich followed with a press conference that both Presidents offered later, Putin called the talks with Erdogan of "substantial” and " constructive" and insisted that the restoration of cooperation responds to Russian national interests and international stability in the region and the world .

Putin said, referring to the most delicate and urgent from the international point of view issue, the current situation in Sirya: "We will exchange information and seek a solution ".

Putin appreciated that Erdogan had come to Russia despite the "difficult internal situation in Turkey” and interpreted it as a sign of "best interests of the Turkish partners in restoring cooperation with Russia ". Edrogan, meanwhile, described the call from Russian President after the difficult and recent moments lived in Turkey after the last attempt internal coup, as "an important fact from the point of moral and psychological support that this entails ".

Both governments are preparing a cooperation program trade, economic, scientific- technical and cultural cooperation for the period 2016-2019.

During the period of "restrictions" have happened “certain changes “must "consider" in bilateral trade and economic relations, the Russian President added.