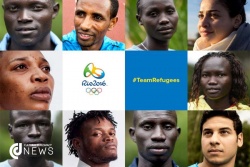 On Friday, August 5th, the Refugee Athletic Olympic Team walked in the Opening Ceremony of the Olympic Games in Rio 2016 and embarked on an inspiring journey as the first team of refugee in the history of the modern Olympic Games.

Since the Olympic games began in 1896, more than 200 national teams have competed for glory in the summer and winter Games. Now for the first time, a team of refugees will too. The International Olympic Committee announced the selection of 10 refugees who will compete in Rio de Janeiro, forming the first Refugee Athletes Olympic Team in history.

This initiative comes at a time when more than 59.5 million people have been forced to flee their homes due to conflict and persecution. The team representing them in Rio hopes to let the world see a glimpse of their untapped resilience and talents.

The team consists of two Syrian swimmers, two judokas of the Democratic Republic of Congo, a marathon runner from Ethiopia and 5 runners of average distance of South Sudan. Rose Nathike Lokonyen, a 23 years runner of South Sudan, was the flag bearer of the first Refugee Athletes team in history onthe famous Maracana Stadium at the opening ceremony of the 2016 Olympic Games.

The team of 10 athletes marched under the banner of the International Olympic Committee (IOC) and completed a full lap of the stadium in front of the team from the host nation, Brazil, as a symbolic gesture to mark their extraordinary journey to the Rio Games.

Amid tears and smiles of joy, athletes have been feted since arriving in Rio for the Games. On Thursday, they received a visit by the United Nations Secretary General Ban Ki-Moon, who wished them and told them they were making history.

Honorary IOC President Jacques Rogge, one of the main architects of the team, spoke passionately about the importance of sport in the lives of young refugees and displaced persons. He said, "The majority are young people. You have many assets to win in life, and have the right to be considered as normal citizens."

The Olympic games are all about making come true, tearing apart cultural barriers and embracing multiculturalism. This athletic team composed of 10 refugees is an example of and solidarity between the world’s nations. Embracing cultural differences and supporting one another is the engine that drives a sustainable cultural diplomatic environment.