The traditional rivalry between both countries’ supporters is one of Rio Olympics’ main highlights, hiding a very special love-hate relationship[edit] 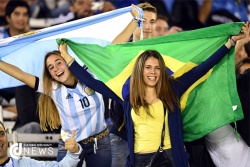