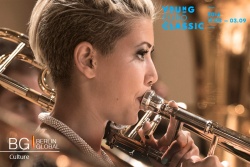 This year’s Young Euro Classic Festival welcomes for the first time a unique orchestra formed by musicians from the Youth Orchestras of Romania and Moldova. The concert will take place at the Berlin Konzerthaus on August 26th. The joint collaboration project was created in 2014, bringing the two neighboring countries once again closer together.

These cultural music projects are a novelty themselves: The Romanian Youth Orchestra was founded in the 2008, while the Youth Orchestra of the Republic of Moldova came into being in the 2013. The fact that their collaborative spirit thrives at such an early point in their existence showcases the enthusiastic uniting power of young talents coming together.

On this very occasion, the repertoire will be focused on reflecting the fullness of the rich Easter European musical opus. It will begin with the 1903 Suite for Orchestra No.1 in C-Major by Romanian composer George Enescu. This piece is a mélange of traditional Romanian folk music, French elegance and German expressivity.

The repertoire will continue with a selection of the most famous excerpts of the passionate 1936 Suite 2 Op. 64 from the classic ballet “Romeo and Juliet”, by Russian composer Sergei Prokofiev. The showcase of skills within the musical endeavour will end with Piotr Ilich Tchaikovsky’s “Rococo Variations”, starring the skills of the 22-year old talented Romanian cellist Andrei Ioniţă.

The exemplar young artist pursues his musical studies at the Berlin Universität der Künste and has already been internationally recognized receiving multiple awards such as the first place at the prestigious Tchaikovsky Competition in Moscow, twice second place at the ARD classical music competition in Munich and at the Grand Prix Emanuel Feuermann in Berlin.

The concert paves the path for a cultural reunion between the two countries. Although the two countries share a similar culture, their political trajectory has taken different routes. The Republic of Moldova experienced isolation during the Soviet Era when the Soviet Union treated the territory as one of its own.

The event is, among other, is supported and sponsored by the Romanian Cultural Institute in Berlin, as well as the Youth and Sports Ministry of the Republic of Moldova, the Edelweiss Foundation for the Development of the Republic of Moldova, the “Romanian Youth” National Arts Centre, the “Serafim Antropov Music Friends” Foundation and the Spanish “Gas Natural Fenosa” energy company.