Sport and Solidarity against Neglected Diseases 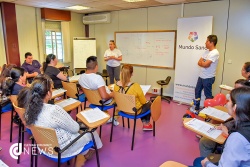 In order to lessen the impact of Chagas disease in Latin America, the Argentinian Foundation Mundo Sano is part of a public-private partnership aimed at raising awareness and promoting social mobilization through sport in Argentina, Bolivia and Paraguay. To that end, they’re teaming up with organizations as different as F.C. Barcelona, the Inter-American Bank for Development and the Japanese Government, to contribute to improve the health of the population, stimulate healthy habits between the youngsters with the main goal of supporting the integral development of vulnerable individuals.

“Neglected diseases are diseases of inequity. They are mainly poverty related diseases. They affect many millions of people worldwide, even if they have treatment and they could be eradicated”. These are the words of Silvia Gold, President of the Mundo Sano Foundation, when they signed their collaboration contract with the Spanish football team F.C. Barcelona. And one of these neglected diseases is among the general public almost unknown, the tropical disease Chagas.

Globally, 65 million people are at risk of contracting the disease and between 7 and 8 million are infected. Also, each year, at least 12 thousand people die because of Chagas disease, 28 thousand new cases occur and 8,000 new-borns are infected during their mother’s pregnancy. It is considered a “silent” disease because the symptoms characteristics of the acute phase (fever, headache, swollen glands) may be nonspecific and therefore misinterpreted or confused with other less dangerous and non-chronic diseases.

That is why, through this initiative the Mundo Sano Foundation seeks to raise awareness between those who are most at risk and also improve the diagnosis and treatment of Chagas. With sport as a tool to reach children, mothers, fathers and professional teams, the program is expected to improve access to treatment and spread prevention habits.

Neglected diseases such as Chagas, Dengue or the now sadly famous Zika affect around 1,500 million people worldwide and are characterized by being neglected in the priorities of public health, mainly because they affect populations living in poor socioeconomic conditions with poor access to health services.

This project may not solve the problem or even get close to solving them, but initiatives such as this one, where different private and public partners from entirely different countries (from South America, Europe and Asia) work together to reach the maximum number of people, show how private-public collaborations in the domain of cultural diplomacy can also have important humanitarian implications.