Stability through Integration: Ecuadorians in Madrid

The Spanish-Ecuadorian community has proven a high level of integration and resilience, despite being hit hard by the economic crisi[edit] 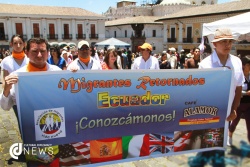 In Madrid, the Ecuadorians represent the largest foreign community. Yet unlike the Romanians or Moroccans, more than half of them have acquired Spanish nationality, thanks to the numerous nationality agreements between Spain and Latin-American countries. They have proven themselves to be a vital part of Madrid’s economic and social life thanks to their hard work and their cultural activities, which have helped to shape the current multi-cultural lifestyle in the Spanish capital.

The Ecuadorian community is one of the largest immigrant communities in Spain, present mainly in the two largest cities, Madrid and Barcelona. In the Spanish capital, they have become one of the most important and recognizable groups: Ecuadorian grocery stores, restaurants or even cultural events and Latino-oriented clubs are today commonplace in many neighbourhoods of the capital. Traditional Ecuadorian products like “Chifles” (fried banana chips), Yucca or “Mantequilla de Maní” (peanut butter) are already part of Spanish gastronomy.

One of the main characteristics of the Ecuadorian community is that over half (almost 55.000 out of 95.000 living in Madrid) have acquired Spanish (and therefore also EU) nationality. This is due to the numerous agreements between Spain and their former Latin-American colonies, which make dual citizenship possible. But it also illustrates the successful integration of the now “former” largest foreign community in Madrid. In fact all sociological studies consider Ecuadorians to be the fourth immigrant community in Madrid, thanks to the huge number of nationalised immigrants.

Immigrants from Ecuador mainly arrived between 1999 and 2005, following a massive financial crisis in their home country. Spain quickly became the main destination for many economic migrants, thanks to the economic boom the country was experiencing during the first decade of this century. After an initial period of social, labour and legal insecurity, a progressive improvement and settlement process was seen. As mentioned above, this is mainly reflected in the broad process of regularization of the Ecuadorian community in Spain and the high number of Ecuadorians who have taken Spanish citizenship. In fact, Ecuadorians constitute the largest foreign group who have nationalized in recent years, almost 27% of total nationalizations.

However, the world economic crisis we are currently experiencing has had a negative effect on the Ecuadorian community in Madrid. As a result, the integration processes and progressive settlement seen prior to the recession show significant signs of erosion today: unemployment and risk of social exclusion are the main challenges this collective faces today. However, thanks to the hard-working mentality and the ability to integrate, demonstrated by the Ecuadorian people, hopes for a better future are not unfounded.