Europe and Iran Implement the Agreements on Nuclear Energy 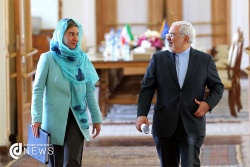 On Saturday 16th of April, the Iranian minister of Foreign Affairs Mohammad Javad Zarif met the European chief of diplomacy Federica Mogherini in Tehran. Together, they discussed the “challenges” induced by the agreement on nuclear energy signed in July 2015 and announced the cooperation of Europe and Iran on these matters.

Indeed, this agreement, the result of twelve years of negotiations and efforts concerning arms control, gives rise to some unexpected problems. However, Mrs. Mogherini insisted on the fact that they are “not obstacles but challenges” and that the cooperation will overcome them. It has already been decided that one liaison officer will be based in Tehran in order to create a permanent and official presence of the EU in Iran.

After July 2015, many hoped that the lifting of the sanctions was going to boost Iran's economy very quickly but their hopes were disappointed. Now, Iran accuses the US to slow down their economic development on purpose. So one of the “challenges” is to make the European banks invest in Iran without being afraid of any retaliatory measures from the U.S. Indeed, the U.S. still limits cash transactions in dollars to Iran. The purpose of the meeting was therefore to strengthen the relationships between Europe and Iran as well as reassuring the European banks concerning investments now that the economic sanctions are over. What is more, Mohammad Javad Zarif has affirmed that his country will bring pressure on the U.S. to make sure that they will lead the cooperation between the non-American banks and those of Iran. He said “It is necessary that the U.S. delivers on its commitments by real facts, not only on papers”. Besides, Iran wants the E.U. to support its application to join the World Trade Organization.

During the meeting, the issues of Human Rights in Iran have not been discussed and concerning the latest launches of ballistic missiles, the Iranian Minister of Foreign Affairs explained that they were not a violation of the nuclear agreements because they were only “dissuasive”, not “defensive”.