Over 100 artists from China and Mexico gave a special performance, showing cultural diplomacy at its best[edit] 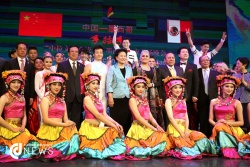 On August 9th Mexico City Theatre held an event that brought together a wide range of artists from China and Mexico. The Chinese Vice Premier, Liu Yandong, and Mexican House Speaker, Jesús Zambrano Grijalva, together with an audience of over 1,000, enjoyed the performances of over 100 artists. The event is one of many that take place this year to celebrate the China-Latin American Cultural Exchange Year.

The event opened with a performance entitled Golden Civilization, showcasing the richness and beauty of Chinese culture to the foreign audience. Later that evening the song, “Beautiful Sky”, considered to be the “second national anthem” in Mexico, was performed by both Chinese and Mexican artists. In this way, two cultures that are very different from one another can use music and dance to build a bridge to cultural understanding and cooperation.

The evening continued with folk dances performed by Chinese artists from the Hui ethnic group and culminated with an adaptation of the Chinese song, “Sing the Folk Song”, and the Mexican song, “La Bamba”, which were redesigned to create a new song.

During this year of cultural exchange China and Latin American countries will strengthen their cultural diplomacy through various exhibitions, music festivals, food festivals, seminars, and tourism promotions. In the second half of the year a new round of performances including ‘The Legend of White Snake’, organized by the China National Peking Opera Company, ‘Impression on National Orchestra’ by China National Traditional Orchestra, and the National Art Museum of China's Chinese Paintings, ‘An Art History from China's National Gallery’ exhibition will be unveiled to the public.

The rich variety of cultural and artistic events that are scheduled to take place during the China- Latin America Cultural Exchange Year will strengthen the cultural ties between China and Latin America, creating space for cooperation and cultural understanding.