Films of the Czechoslovak New Wave movement to be screened at the Deutsches Filminstitut, Frankfurt am Main, as part of Slovak Culture Days 2016[edit] 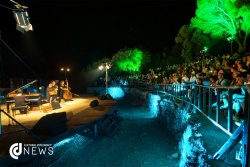 The films of the Czechoslovak New Wave, one of the most important periods of filmmaking in former Czechoslovakia, are being screened throughout the summer at the Deutches Filminstitute in Frankfurt am Main. The initiative it the result of the cooperation between the Slovak Film Institute and Imrich Donath, Honorary Consul of the Slovak Republic.

he Czechoslovak New Wave was one of the most significant renewal movements in European cinema in the 1960s. The temporary lifting of censorship enabled the filmmakers to take up socially critical subject matter. Influenced by movements such as the nouvelle vague and Italian Neo-realism, the wave was stylistically very different, yet all the films had one thing in common - their love of experimentation. Czech directors, such as Miloš Forman and Jiří Menzel, became known internationally. The series, however, also includes Slovakian films by Peter Solan, Štefan Uher and Juraj Jakubisko.

The characteristic features of the Czechoslovak New Wave are long, often improvised dialogues, black or even absurd humour and the portrayal of certain roles by non-actors. The themes of the films often included love delusions of young people or warped morality. The directors tried to portray humanity honestly - characters were portrayed with both good and bad characteristics. The films also frequently included non-arranged scenes.

The Czechoslovak New Wave movement was only possible thanks to the advanced film school, a lot of students in fifties and sixties, and mostly thanks to the liberalisation of the socialist regime at the beginning of sixties, resulting in a slight relaxing of censorship. Students, especially of the Film and TV School in Prague, had access to films from abroad, such as French new wave films and other artistically original pieces.

This wonderful programme was possible only thanks to the cooperation between the Slovak Film Institute and Imrich Donath, Honorary Consul of the Slovak Republic. It is organised as part of Slovak Culture Days 2016, which aims to enhance exchange on cultural and economic levels. The motto of this years’ Slovak Culture Days is “Slovakia - Heart of Europe”, and is meant to celebrate both the common roots and the common future in a united Europe, which is both politically and economically open.