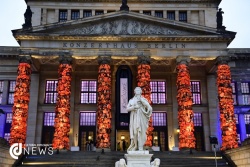 The exhibition “Ai Weiwei at Cycladic” by the Chinese artist and activist Ai Weiwei, will be presented on the 20th of May and it will last until the 30th of October 2016. It will be held in Greece at the Museum of Cycladic Art in Athens and it will show a mini-survey of the artist’s career, a marble sculpture inspired by the museum’s permanent archaeological collection and some works made about the refugee crisis. Indeed, according to the organizers, the artist will explore history and cultural heritage as well as current social and political affairs.

In January, Ai Weiwei announced plans to set up a studio on Lesbos and during the last months he documented and analyzed the troubles of refugees, spending time and living with them. Hundreds of thousands of migrants choose Lesbos as a destination and since the start of the 2015, more than 700 people have died in the Aegean Sea. Indeed, this island is situated in a strategically position that makes it a gateway and a spot of the refugee crisis in Europe. The 10% of all income from merchandise sales and sponsorship funds of the exhibition will be donated to hand-selected NGOs working with refugees across the country.

The artist undertook several projects related to the refugee crisis and his aim is to raise awareness of the situation undertaking artistic actions and sharing images on his social networks as for example Instagram. Indeed, he said “This is a very historical moment from any perspective. As an artist I want to be more involved, I want to [create] artworks in relation to the crisis and also create some kind of consciousness about the situation." In March he visited Idomeni refugee and migrant camp located at the Greek-Former Yugoslav Republic of Macedonia border where he set up a white grand piano giving the chance to the 24-year-old Syrian pianist Nour Alkhzam to play the piano for the first time in three years.

He undertook projects related to these issues also in other cities around Europe. In February he draped the five-column of the Berlin’s Konzerthaus facade with 14,000 refugee life jackets left on the shores of Lesbos. He is an example of how art and culture in general, could be useful in spread information and how they are more and more linked to social and historical facts. As Ai Weiwei told to the Guardian: “As an artist I have to relate to humanity's struggles […] I never separate these situations from my art".