The New National Monument of the U.S Claims Women's Equality

The Headquarters of the National Women's Party Known as the Sewal-Belmont House Has Become the New National Monument of the Country and Will now Be Part of the National Park Service. 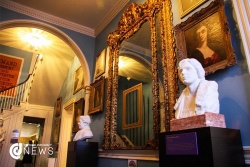 The Sewal-Belmont House is simultaneously a house, and a museum, that back in the days was used as home for the main nation´s women organization and today has become designated by the Obama administration as the Belmont-Paul Women´s Equality National Museum.

There are other three national parks, next to the U.S national monument, that represent women´s history. The Sewal-Belmont House was bought by the suffragist Alice Paul with the aim of making it become the National Woman´s Party (NWP) back in the year 1929 and it remained like that until the year 1997 which was when the NWP made the house turn into a museum.

The fact of making the building become the national monument requires that it should be adjusted to the needs that this designation requires such as an adequate funding in order to keep up a good maintenance of the building. Concerning the funding of the building may involve some struggles.

The executive director of the Sewal-Belmont House, Paige Harrington, said that “As any small museum moves forward, it gets harder and harder to take care of all the needs of the property and the needs of the collection”.