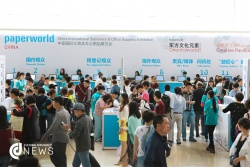 China is a country of ancient civilization, culture and traditions. It is the world's most populated country and has the second strongest economy in the world. China plays a significant role in the conduction of contemporary cultural diplomacy between the country and the rest of the world. Due to its rich cultural heritage that has developed throughout 4,000 years of history,` the Chinese civilization is recognized as one of the four great ancient civilizations of the world, together with ancient Egypt, Babylon and India.

Paperworld China 2016 will be held from the 20th to 22nd of September 2016 at Shanghai’s New International Expo Centre, Shanghai, China. This will be the 12th edition of the trade fair. “Paperworld China” is a great opportunity for visitors who want to gain knowledge about the Eastern cultural traditions and arts. In addition this trade fair is part of an exchanging series of innovative cultural programs between the east and the west.

During this three-day event, a special Oriental Culture Zone will be opened. It will feature paper products, four treasures of study (i.e. brush, ink, paper, rubbing stone), festive items and more components that highlight the integration of design and cultural symbols, as well as techniques and elements of the East. The Oriental Culture Zone will highlight traditional arts and workmanship while combining cultural and contemporary elements.

During the event, the exquisite cultural image of the Orient can be seen. Oriental culture has a rich spiritual and mystical history. An important part from the oriental traditions is the national clothing. Paperworld China is an attractive trade fair not only for Asian designers but for western designers who want to show their new collections and materials and exchange ideas.

The Oriental Culture Zone will show the beauty of the oriental lifestyle, traditions, cross-cultural programs and products. Various exhibitions of visual art and crafts as well as high quality innovations with cultural elements make this trade fair an essential platform for culture exchange.