Promoting cultural diversity, intercultural dialogue and a culture of peace[edit] 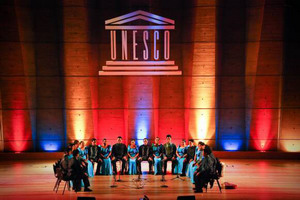 The Madrigal Singers were organized in 1963 by the National Artist Professor Andrea Veneracion. The group is composed of students, faculty and alumni from all the different colleges of the University of the Philippines (UP). The choir is pretty famous as it consistently won all the prizes in the world's most famous choral competitions: Arezzo and Gorizia in Italy, Marktoberdorf in Germany, Spittal in Austria, Neuchatel in Switzerland, Tours in France, Varna in Bulgaria, Debrecen in Hungary, Cantonigros, Tolosa and Torrevieja in Spain. They hold the distinction of being the first choir in the world to win the European Grand Prix for Choral Singing twice (1997 and 2007). The Madrigal Singers had quite a far reaching influence on the Philippine and Asian choral scene. The group was even recognized in 2009 by the UNESCO as Artists for Peace for "putting fame and influence at the service of UNESCO's ideals and efforts to promote cultural diversity, intercultural dialogue and a culture of peace".