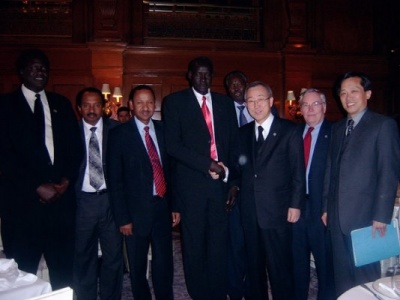 US Jazz Diplomacy in the Post-Cold War Era[edit]

Following in the footsteps of Cold War "Jazz Ambassadors" like Dizzy Gillespie and Louis Armstrong, the US State Department launched the "Rhythm Road" program which involved sending American musicians abroad to areas where the US society and culture are often met with animosity. Rhythm Road represents the new generation of musical ambassadors; reaching beyond concert halls to interact with other musicians and citizens around the globe. Designed to promote intercultural dialogue, bypass negative images and fight stereotypes, the program has seen American artists interact with peoples and audiences from Africa, Asia and South America. Although an overt act of Cultural Diplomacy sponsored at the state level, Rhythm Road promotes real grassroots interaction between US musicians and peoples of the world, promoting a spirit of cooperation, friendship, creativity and peace.